It’s been one year that we are actively working with artists and designers to develop this platform. There was a time of technical problems. Now things run kind of smoothly.

There were many reasons why we started to work on this tool. Everyone of us had different views. One of mine is that I enjoy exchange in written form. Since I was a teenager I used forum, blogs and platforms, one after the other, generally following the friends. I particularly remember one, it was called fotolog, a picture and a small text. I also had enjoyed instagram when I started to use it, it was a kind of visual diary with a tiny note, similar to Fotolog but as an app. A way to have words and images dialogue.

When Instagram became more subtle and technically more efficient, I had lesser and lesser fun using it. I kept on doing it because of the habit. The amount of advertisement, empty political statements that don’t invite to discuss but just act as a brand, unpoetic content and egocentrism that I was absorbing was doing me more bad than good. At some point I uninstalled it*.

We started to develop vorstellen. I moved my kind of diary and research snippets activity here. I had hoped friends and acquaintances would jump in, and we could create a place for exchange outside of marketing media. Some did, but mostly they don’t see the point. Part of our concept is to develop this thing with the users, so to have a tool tailored to the need of poetic exchange. I do wonder the reasons for inactivity, because I can just speculate about them. One of my speculated ideas is that there are no "gratification" buttons on vorstellen.network.

Today I opened up instagram to read a message and I smiled at Sanna’s entry. 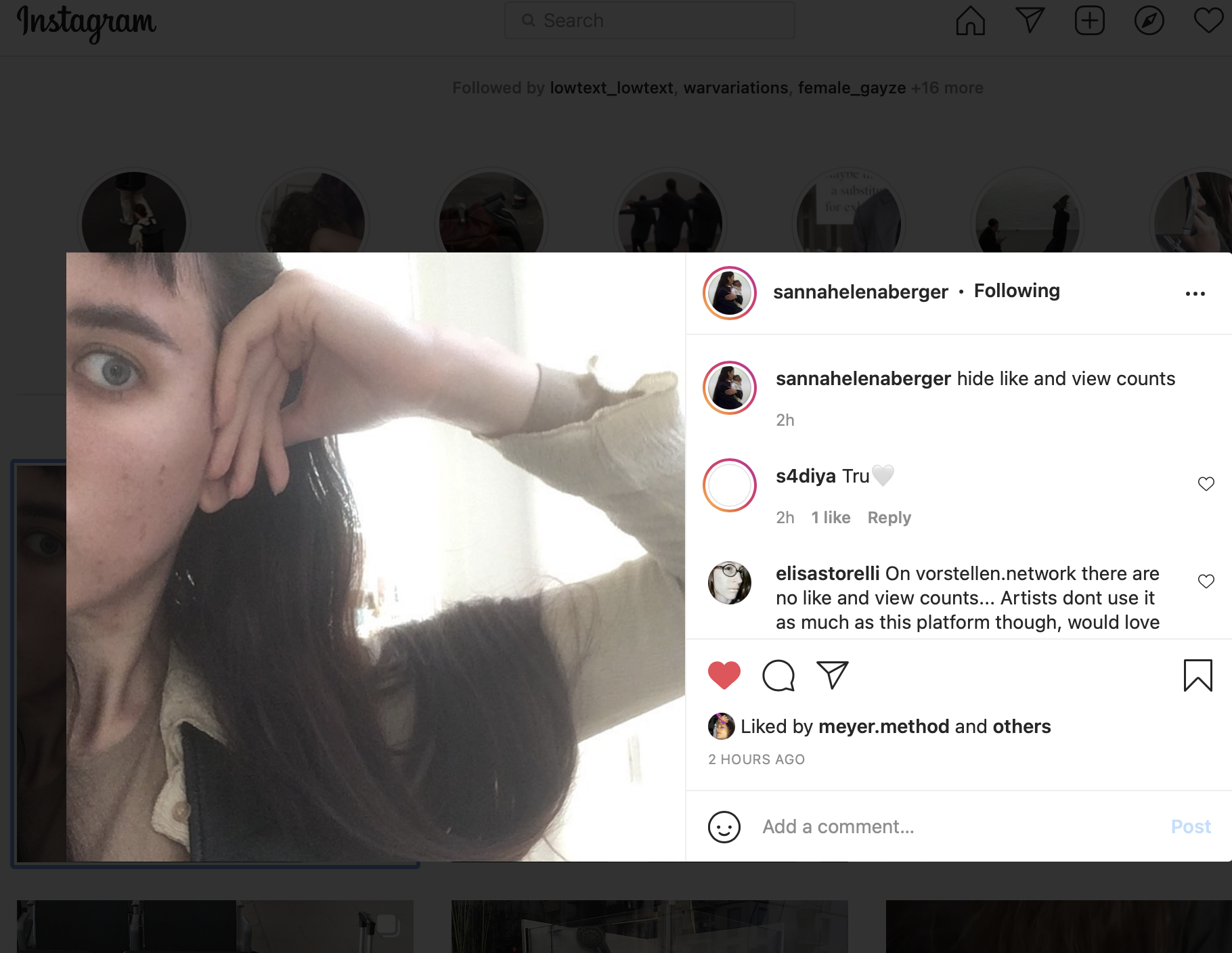 I remembered a long discussion with Philipp and Dario about adding like and view counts on vorstellen. I was totally against it. Let’s for once put the content forward, rather than the ego. We might change the idea, democratic decisions on this kind of matter is to be taken by active members**. But for now, where are the active members? One is here, waiting to be forked. Not waiting to be liked. I embrace disagreement and dislike as part of dialogue and human communication. It is so important to be annoyed in order to create, and it is so important to like, but for real, in order to survive.

* then later re-install it with the decision of using it just for advertisement of shows and projects, that is what the company does at the end.

** we included search, and pinning and similar stuff that we didn’t want in the beginning, upon request.